Megrez, Delta Ursae Majoris (δ UMa), is the faintest of the seven stars that form the Big Dipper asterism. It is a third magnitude star with an apparent magnitude of 3.312, located at a distance of 80.5 light years from Earth. Megrez is the 11th brightest star in the constellation Ursa Major and does not make the list of the 200 brightest stars in the sky.

Megrez has the stellar classification A3V, indicating a hydrogen-fusing dwarf still on the main sequence, appearing white or blue-white in colour. With 1.4 solar radii, it is slightly larger than the Sun and has a mass 1.63 times solar. With an estimated temperature of 9,480 K, it is 14 times more luminous than the Sun. It has an absolute magnitude of 1.39. Megrez is a young star, with an estimated age of 300 million years. It rotates very quickly, with a projected rotational velocity of 233 km/s.

Megrez has two companions, both invisible to the unaided eye. One is a 10th magnitude star and the other an 11th magnitude star. Both companions are located at an angular separation of 2 arcminutes from Megrez.

Megrez has the Bayer designation Delta even though it is only the 11th brightest star in Ursa Major because Johann Bayer, the German uranographer who catalogued the stars in his star atlas Uranometria (1603), assigned the Greek letter designations to bright Ursa Major stars from west to east, not in the order of brightness. For this reason, the constellation’s brightest star, Alioth, has the designation Epsilon Ursae Majoris, while the Alpha designation went to Dubhe, the constellation’s westernmost bright (second magnitude) star.

Megrez is an outlying member of the Ursa Major Moving Group (Collinder 285), a group of stars that share a common origin, velocities and motion through space. The members of the group are believed to have formed in the same molecular cloud about 300 million years ago. They have similar chemical compositions and are moving in the same direction. The centre of the Ursa Major Moving Group lies approximately 80 light years from the Sun. The members include all the Big Dipper stars except Alkaid and Dubhe, as well as a number of other bright stars in other constellations, among them Alphecca (Alpha Coronae Borealis), Menkalinan (Beta Aurigae), Gamma Leporis, Beta Serpentis and Skat (Delta Aquarii).

Ancient Arabic astronomers saw the Big Dipper stars as a funeral procession, with the stars of the handle (Alkaid, Mizar and Alioth) representing mourners and the bowl stars (Megrez, Phecda, Dubhe and Merak) representing the bier.

In Hindu astronomy, the seven stars were associated with the Saptarishi, the Seven Sages.

The name Megrez (pronunciation: /ˈmiːɡrɛz/) is the star’s traditional name. It comes from the Arabic al-maghriz, meaning “the base.” The name refers to the base of the bear’s tail and the star’s position in Ursa Major. It was officially approved by the International Astronomical Union’s (IAU) Working Group on Star Names (WGSN) on June 30, 2016.

Delta Ursae Majoris was also known by the historical name Kaffa, but the origin of the name is unknown.

The Chinese know the star as the Fourth Star of Northern Dipper (北斗四). The name refers to the Chinese Northern Dipper (北斗) asterism, which corresponds to the Big Dipper. (The Chinese also have a Southern Dipper, formed by some of the bright stars of the Teapot asterism in Sagittarius.) The other Chinese name for the star is Tiān Quán (天權), or the Star of Celestial Balance.

In Hindu mythology, the star is associated with Atri, one of the Saptarishi (Seven Sages), credited as the composer of many hymns to various Vedic deities. The fifth Mandala (book) of Rigveda is named after him (the Atri Mandala) and the 87 hymns it contains are attributed to him and his lineage.

Even though it is not a conspicuous star by itself, Megrez is easy to find because it forms one of the best known asterisms in the night sky, the Big Dipper, with six other relatively bright stars. Megrez is the star that connects the Great Bear’s hindquarters to its tail and the Big Dipper’s handle to its bowl.

The stars of the Big Dipper are circumpolar to most northern observers and can be seen throughout the year. The best time of year to observe them is during the months of spring, when Ursa Major is prominent in the evening sky.

Big Dipper stars make it easy to locate a number of interesting deep sky objects. Megrez can be used to find Messier 40, a double star catalogued as a deep sky object by mistake by Charles Messier. M40 lies only 1.5 degrees northeast of the star. Also designated as Winnecke 4, it is best seen in binoculars or small telescopes. The spiral galaxies NGC 4290 and NGC 4284 lie in the same field of view.  The magnitude 11.7 spiral galaxy NGC 3898, which forms a triangle with Megrez and Phecda, appears closer to Phecda and can be seen about 2.5 degrees to the north-northwest of the star.

Megrez can also be used to find the famous Whirlpool Galaxy (Messier 51), which lies just under Alkaid in the neighbouring constellation Canes Venatici. A line drawn from Dubhe through Megrez and extended by almost twice the distance between the stars to the southeast leads directly to M51. 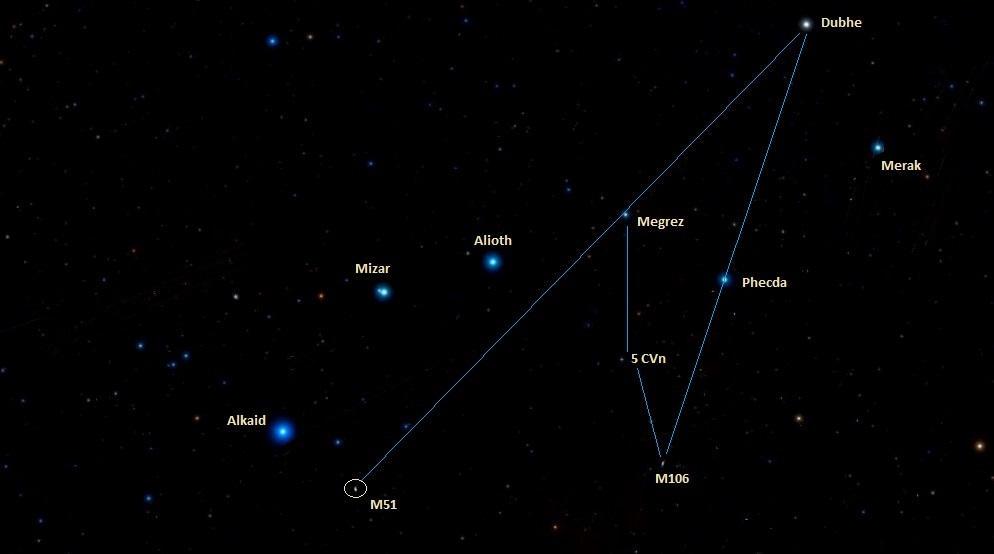 Stargazers can also find the spiral galaxy Messier 106 by star-hopping from Megrez to the magnitude 4.77 star 5 Canum Venaticorum (5 CVn) and then to M106. 5 CVn is located 5.5 degrees south-southeast of Megrez, and M106 lies just over 4 degrees south of 5 CVn.

Megrez is located in the constellation Ursa Major. The Great Bear is the largest northern constellation and the third largest of all 88 constellations, smaller only than Hydra and Virgo. It is best known for the Big Dipper asterism, formed by its brightest stars, but it occupies a much larger area of the sky (1,280 square degrees) than the asterism.

Ursa Major is home to a number of well-known deep sky objects. In addition to those already mentioned, these include the Messier galaxies M81, M82 and M101, also known as Bode’s Galaxy, the Cigar Galaxy and the Pinwheel Galaxy, M108 and M109, and the bright planetary nebula M97 (the Owl Nebula).