Rho Ophiuchi (ρ Oph) is a multiple star system located at an approximate distance of 360 light years from Earth in the constellation Ophiuchus. The main pair in the system, Rho Ophiuchi AB, has a combined apparent magnitude of 4.63 and, while it is visible to the unaided eye, it is not among the 20 brightest points of light in Ophiuchus. The Rho Ophiuchi system is surrounded by a large region of nebulosity known as the Rho Ophiuchi cloud complex. The nebula is one of the nearest star-forming regions to the Sun.

The Rho Ophiuchi star system consists of at least five components. The main pair, Rho Ophiuchi AB, is a visual double composed of two class B2 stars, a subgiant and a giant. The total mass of the system is about 23.6 solar masses. The two stars are separated by 3.1’’ on the sky, which translates to a physical distance of about 344 astronomical units. However, the real separation between the stars is greater and they have an orbital period of 2,398 ± 326 years.

Rho Ophiuchi A (HD 147933) has been classified as both a subgiant and a main sequence star. The star has an apparent magnitude of 5.067. With an effective surface temperature of 6,873.50 K, it is about 164 times more luminous than the Sun. It is also considerably larger than the Sun, with 9.03 solar radii. Rho Ophiuchi C (HD 147932) has the stellar classification B5 V – indicating a blue main sequence star – and an apparent magnitude of 7.290. It is classified as a rotationally variable star. The star has a radius 3.33 times that of the Sun and shines with 19.309 solar luminosities with an effective temperature of 6,631 K. 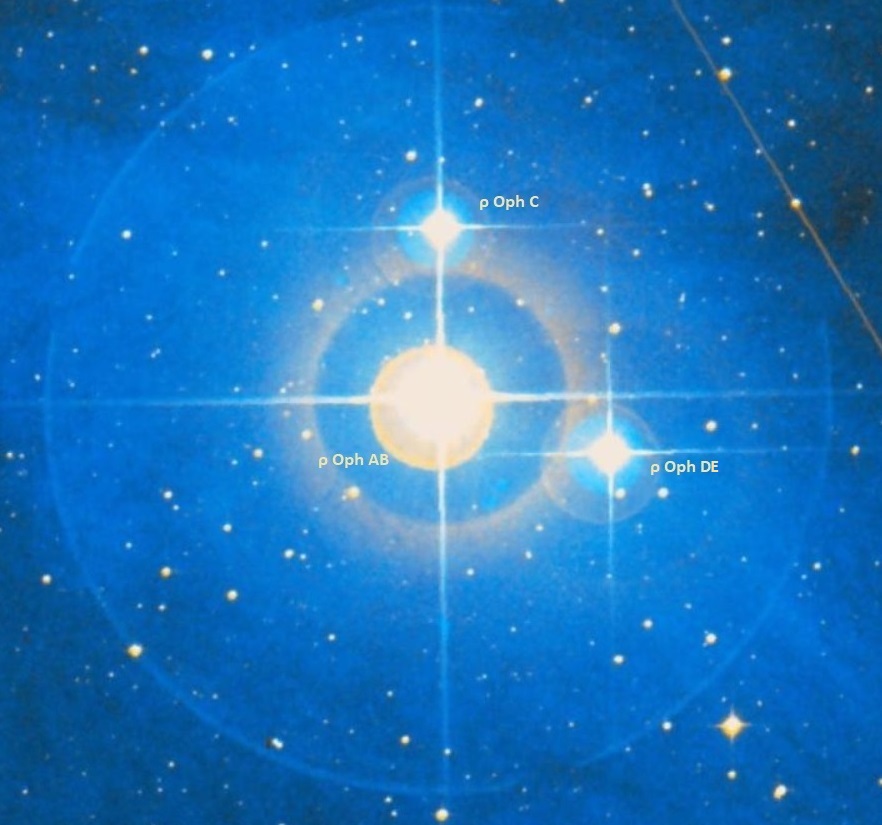 Rho Ophiuchi DE (HD 147888) is a binary star with a total mass of about 5.8 solar masses. It has the stellar classification B3/4 V, indicating another blue main sequence star. It is slightly brighter than Rho Ophiuchi C, with a visual magnitude of 6.807. Unlike the main pair, neither of the two fainter components is visible to the unaided eye. Rho Ophiuchi DE is about 14 times more luminous than the Sun with a surface temperature of 6,676 K. It has a radius 2.81 times that of the Sun. The two components – Rho Ophiuchi D and E – orbit each other with a period of 675.5 ± 32.5 years.

Rho Ophiuchi is embedded in the Rho Ophiuchi cloud complex, a large nebula of dust and gas that makes the star system appear 1.45 magnitudes dimmer than it really is. Without the interstellar extinction, Rho Ophiuchi would shine at magnitude 3.18. 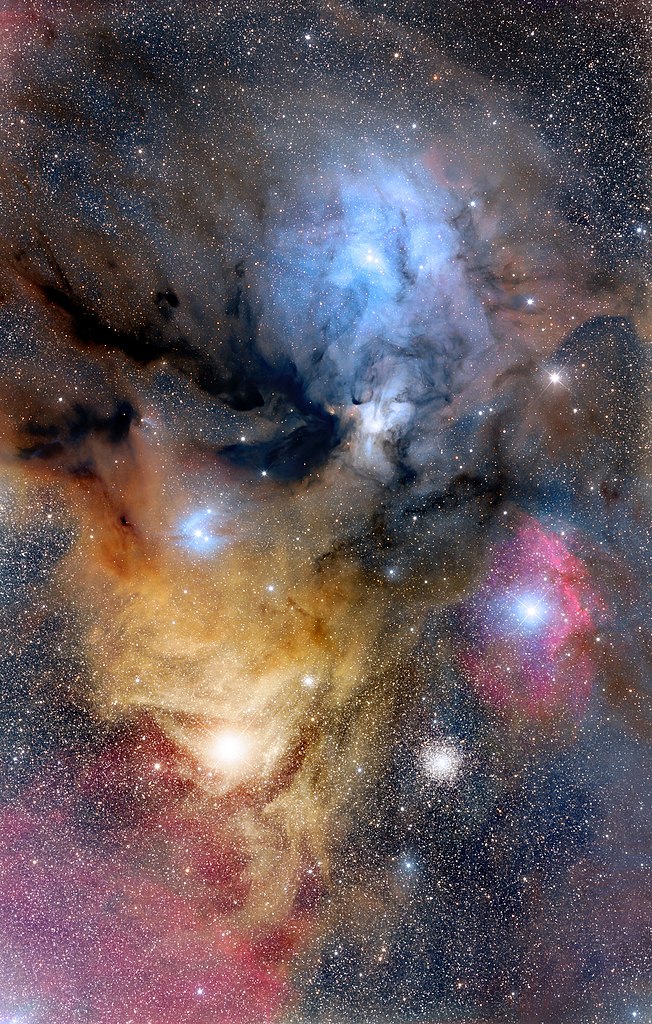 The Rho Ophiuchi cloud complex is one of the nearest star forming regions to the Sun. It lies at a distance of about 427 light years from Earth. Visible from all inhabited locations on both hemispheres for at least a part of the year, the nebula is a popular target for backyard telescopes, as well as for scientific observations.

The nebula lies a degree south of Rho Ophiuchi and stretches across an area of 4.5 by 6.5 degrees of the sky. It is composed of emission, reflection and dark nebulae. The brightest parts of the cloud complex include the nebulae IC 4604, IC 4603 and IC 4605. 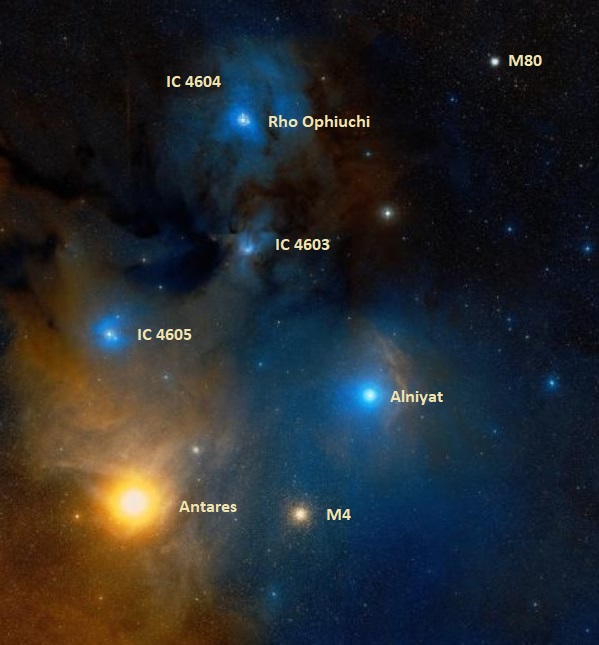 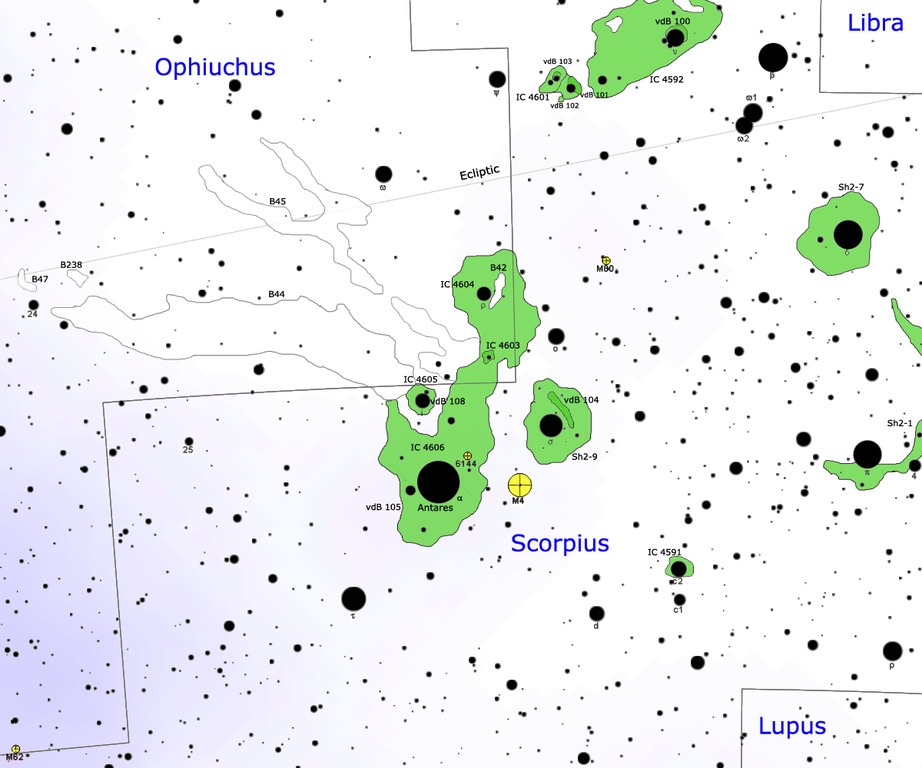 Rho Ophiuchi is relatively easy to find because it is located just north of the bright supergiant Antares. However, with a combined apparent magnitude of 4.63, the star system cannot be seen from heavily light-polluted areas. Rho Ophiuchi forms a triangle with Antares and Alniyat (Sigma Scorpii), a magnitude 2.28 star system flanking the red supergiant. 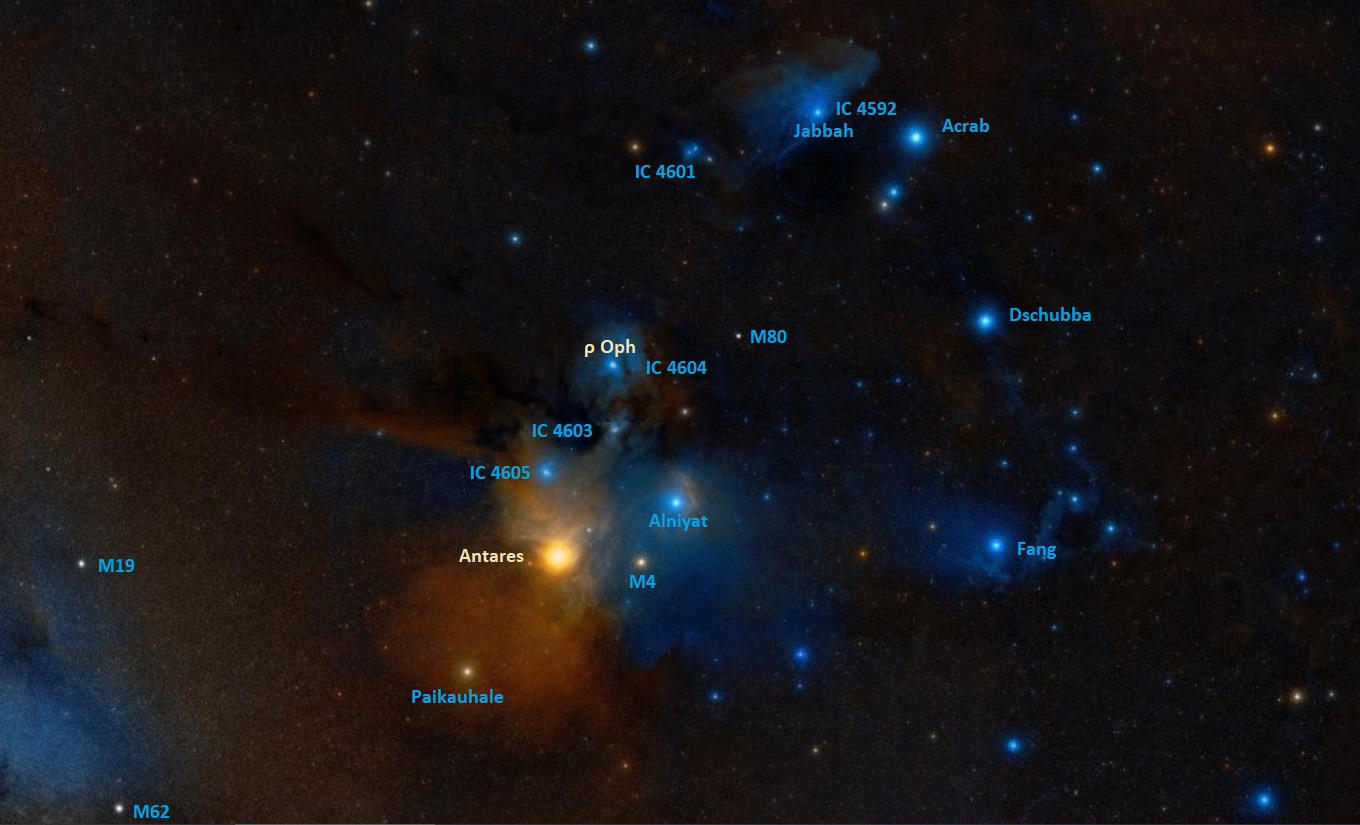 In addition to the Rho Ophiuchi nebula, there are several bright deep sky objects appearing in the vicinity of the star. The globular cluster Messier 80 stretches across 10’ of the sky and has a spatial diameter of 95 light years. With an apparent magnitude of 7.87, the cluster can be seen in small telescopes. It lies west of Rho Ophiuchi, about halfway between the brighter Antares and Acrab in Scorpius.

Messier 4, another globular cluster, lies south of Rho Ophiuchi, about a degree and a half west of Antares. 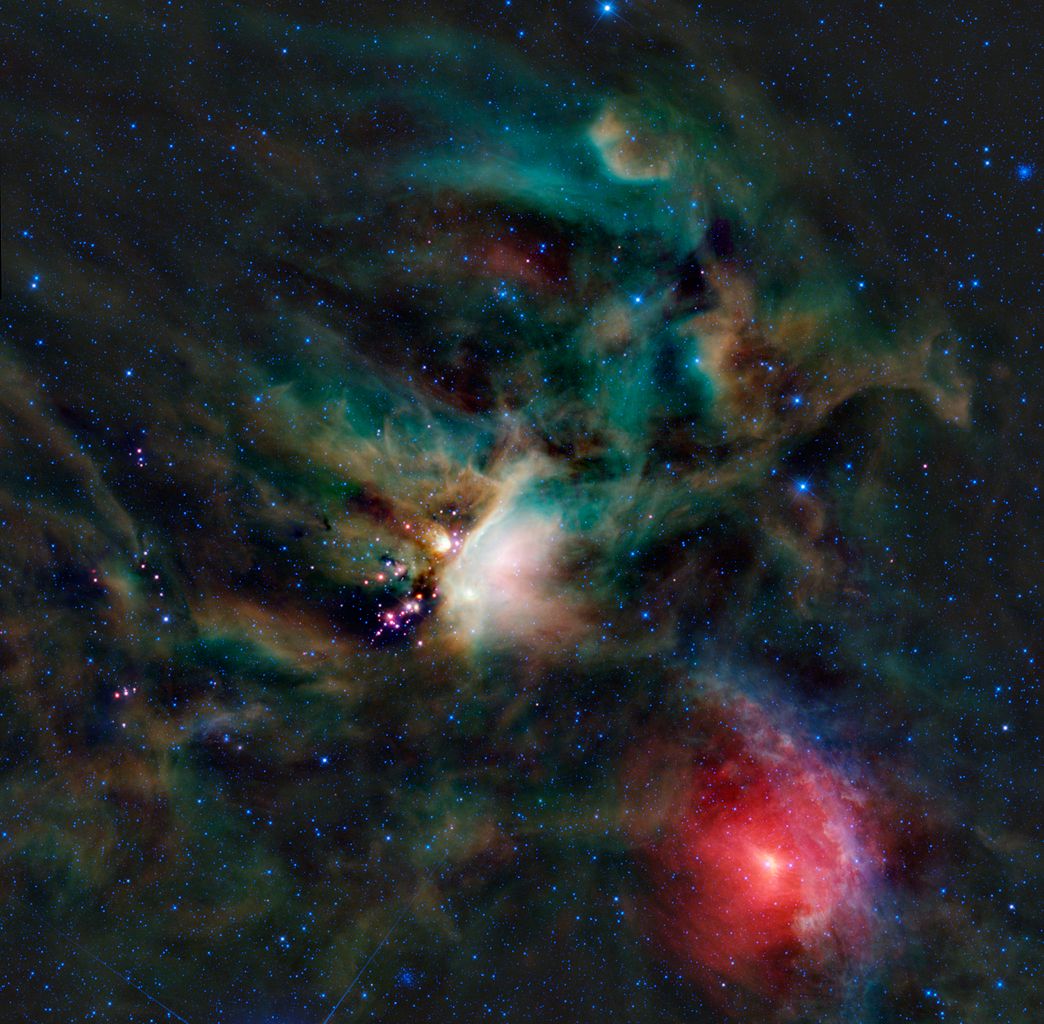 A rich collection of colourful astronomical objects is revealed in this picturesque image of the Rho Ophiuchi cloud complex from NASA’s Wide-field Infrared Explorer, or WISE. The Rho Ophiuchi cloud (pronounced ‘oh-fee-yoo-ki’ and named after a bright star in the region) is found rising above the plane of the Milky Way in the night sky, bordering the constellations Ophiuchus and Scorpius. It’s one of the nearest star-forming regions to Earth, allowing us to resolve much more detail than in more distant similar regions, like the Orion nebula. The amazing variety of different colours seen in this image represents different wavelengths of infrared light. The bright white nebula in the centre of the image is glowing due to heating from nearby stars, resulting in what is called an emission nebula. The same is true for most of the multi-hued gas prevalent throughout the entire image, including the bluish bow-shaped feature near the bottom right. The bright red area in the bottom right is light from the star in the centre – Sigma Scorpii – that is reflected off of the dust surrounding it, creating what is called a reflection nebula. And the much darker areas scattered throughout the image are pockets of cool dense gas that block out the background light, resulting in absorption (or ‘dark’) nebulae. WISE’s longer wavelength detectors can typically see through dark nebulae, but these are exceptionally opaque. The bright pink objects just left of centre are young stellar objects (YSOs). These baby stars are just now forming; many of them are still enveloped in their own tiny compact nebulae. In visible light, these YSOs are completely hidden in the dark nebula that surrounds them, which is sometimes referred to as their baby blanket. We can also see some of the oldest stars in our Milky Way Galaxy in this image, found in two separate (and much more distant) globular clusters. The first cluster, M80, is on the far right edge of the image towards the top. The second, NGC 6144, is found close to the bottom edge near the centre. They both appear as small densely compacted groups of blue stars. Globular clusters such as these typically harbour some of the oldest stars known, some as old as 13 billion years, born soon after the Universe formed. There are two other items of interest in this image as well. At the 3 o’clock position, relative to the bright central region, and about two-thirds of the way from the centre to the edge, there is a small faint red dot. That dot is an entire galaxy far, far away known as PGC 090239. And, at the bottom left of the image, there are two lines emerging from the edge. These were not created by foreground satellites; they are diffraction spikes (optical artefacts from the space telescope) from the bright star Antares that is just out of the field of view. Image: NASA/JPL-Caltech/WISE Team Ophiuchus is the 11th largest constellation in the sky. It lies on the ecliptic and is visible from all inhabited areas for at least a part of the year. The constellation does not contain any first-magnitude stars that would make it stand out in this part of the sky, but it is not faint either. It contains five stars brighter than magnitude 3.00. Rasalhague, the brightest star in the constellation, has an apparent magnitude of 2.08.

Ophiuchus is home to several bright globular clusters catalogued by Charles Messier: Messier 9, Messier 10, Messier 12, Messier 14, Messier 19, Messier 62, and Messier 107. Other interesting deep sky objects in the constellation include the open cluster IC 4665, the ultraluminous infrared galaxy NGC 6240, the planetary nebula known as Minkowski’s Butterfly (M2-9) or the Twin Jet Nebula, and the Dark Horse Nebula, a large dark nebula near the border with Sagittarius.

The best time of year to see the stars and deep sky objects in Ophiuchus is during the month of July, when the constellation is prominent in the evening sky. The entire constellation is visible from locations between the latitudes 80° N and -80° S.