Chara, Beta Canum Venaticorum (β CVn) is a Sun-like yellow main sequence star located in the constellation Canes Venatici, the Hunting Dogs. With an apparent magnitude of 4.26, it is the second brightest star in the constellation, after Cor Caroli. Chara is one of our nearest visible neighbours, located only 27.53 light years from Earth. Together with the brighter Cor Caroli, it outlines the southern of the two dogs represented by Canes Venatici.

Chara is a yellow dwarf of the spectral type G0 V. Its parameters are similar to the Sun’s. It has a mass of 1.025 solar masses and a radius 1.123 times solar. With a surface temperature of 5,653 K, it shines with 1.151 solar luminosities. The star spins a little faster than the Sun, with a projected rotational velocity of 2.9 km/s. Its estimated age is between 5.3 and 7.1 billion years.

Chara was once suspected to be a spectroscopic binary, but observations have not confirmed this. The Catalog of Components of Double & Multiple Stars lists two companions: one at a separation of only 0.1 arcseconds and another at 76.2 arcseconds. The latter star has a visual magnitude of 9.0. Chara is one of the nearest Sun-like stars to the solar system, which makes it an interesting target for planet hunting missions. In 2006, American astronomer and astrobiologist Margaret Turnbull singled the star out as the top candidate to search for Earth-like extraterrestrial life by listening for radio signals from intelligent civilizations. No planets have been detected orbiting the star to date. Other stars on Turnbull’s SETI (Search for Extraterrestrial Intelligence) list were HD 10307, HD 211415, 18 Scorpii, and 51 Pegasi (host to the first extrasolar planet discovered orbiting a main sequence star).

Chara has been used as a stable anchor point for the Morgan-Keenan system of spectral classification since 1943. The MK system is used to classify stars based on the appearance of their spectra. Chara is a spectral standard for its class (G0 V).

The name Chara (pronunciation: /ˈkɛərə/) is Greek for “joy.” It originally applied to the southern of the two dogs represented by Canes Venatici, but later came to be used for the constellation’s second brightest star. Canes Venatici represents the two hunting dogs held by Boötes, the Herdsman, as he pursues the Great Bear around the pole.

The name Chara was approved by the International Astronomical Union’s (IAU) Working Group on Star Names (WGSN) on July 20, 2016.

Beta Canum Venaticorum was also historically known as Asterion (“starry”). Asterion is the name of the northern dog of Canes Venatici. Chara is relatively easy to find but, with an apparent magnitude of 4.26, it cannot be seen from heavily light-polluted areas. Cor Caroli and Chara lie directly below the handle of the Big Dipper. The imaginary line connecting the two stars is roughly parallel to the line connecting Alkaid and Mizar, the stars at the end of the Dipper’s handle. The brighter Cor Caroli appears south of Alkaid and Chara, below Mizar. The irregular galaxy NGC 4485 and barred spiral NGC 4490 appear northwest of Chara. The two make another interacting pair. As a result of their interaction, both galaxies are undergoing intense starburst activity. NGC 4485 has an apparent magnitude of 11.93 and lies 25 million light years away. NGC 4490, popularly known as the Cocoon Galaxy, has a visual magnitude of 9.8 at lies at a similar distance. The two galaxies are listed as Arp 269 in the Atlas of Peculiar Galaxies. 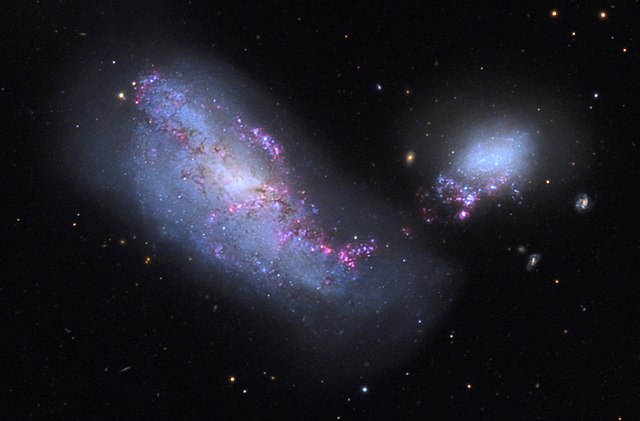 Chara is located in the constellation Canes Venatici. Representing Asterion and Chara, the two hunting dogs of Boötes, Canes Venatici occupies 465 square degrees of the northern sky between the larger Boötes and Ursa Major. It is a relatively faint constellation, with only one star (Cor Caroli) brighter than magnitude 3.00. The constellation was created by Polish astronomer Johannes Hevelius in the late 17th century from faint stars under the handle of the Big Dipper (or the Great Bear’s tail). Even though it is fairly inconspicuous, Canes Venatici is familiar to stargazers because it contains several popular telescope targets. These include the bright globular cluster Messier 3, the galaxies Messier 51 (the Whirlpool Galaxy), Messier 63 (the Sunflower Galaxy), Messier 94, Messier 106, the Hockey Stick Galaxies (NGC 4656 and NGC 4657), the Whale Galaxy (NGC 4631), NGC 5033, NGC 5005, and the Big Lick Galaxy Group, a group of ten galaxies that includes the bright members NGC 5371, NGC 5353, and NGC 5350.

The best-known stars in the constellation include Cor Caroli, a prototype for its own class of variable stars, the carbon star La Superba (Y Canum Venaticorum), one of the reddest stars known, and RS Canum Venaticorum, a close binary star system that also serves as a variable class prototype.

The best time of year to observe the stars and deep sky objects in Canes Venatici is during the month of May, when the constellation is high in the evening sky. The entire constellation is visible from locations between the latitudes 90° N and 40° S.