41 Arietis (41 Ari) is a triple star system located in the constellation Aries. The brightest component in the system, 41 Arietis Aa, is formally named Bharani. With an apparent magnitude of 3.63, 41 Arietis is the third brightest star in Aries, after Hamal and Sheratan. It lies at a distance of 166 light years from Earth.

The primary component is a blue-white main sequence star of the spectral type B8 Vn. The star has a mass 3.1 times that of the Sun and its estimated age is about 130 million years. With an estimated temperature of 11,900 K, it shines with 160 solar luminosities. The ‘n’ suffix in its spectral class stands for “nebulous” absorption lines detected in its spectrum, caused by the Doppler effect of fast rotation. The star is an exceptionally fast spinner, with a projected rotational velocity of 175 km/s. As a result of its rapid rotation, the star’s equatorial radius is 12% larger than its polar radius.

The companion is separated by 0.3 arcseconds from the primary. It takes several decades to complete an orbit. Bharani is a probable member of the AB Doradus Moving Group, a stellar association of about 30 members that share the same origin and motion through space with the star system AB Doradus. These stars have a similar age and composition and are believed to have formed in the same stellar nursery.

Even though Bharani is brighter than all but two Aries stars, it only has a Flamsteed number (41), but not a Bayer designation. When the German astronomer Johann Bayer assigned Greek letter designations to stars, 41 Arietis was not seen as part of Aries. It belonged to several constellations (now obsolete) before the official constellation boundaries were established in the 1920s. The constellations – or one constellation that went under several different names – consisted of 41 Arietis, 39 Arietis (Lilii Borea), 33 Arietis, and 35 Arietis. 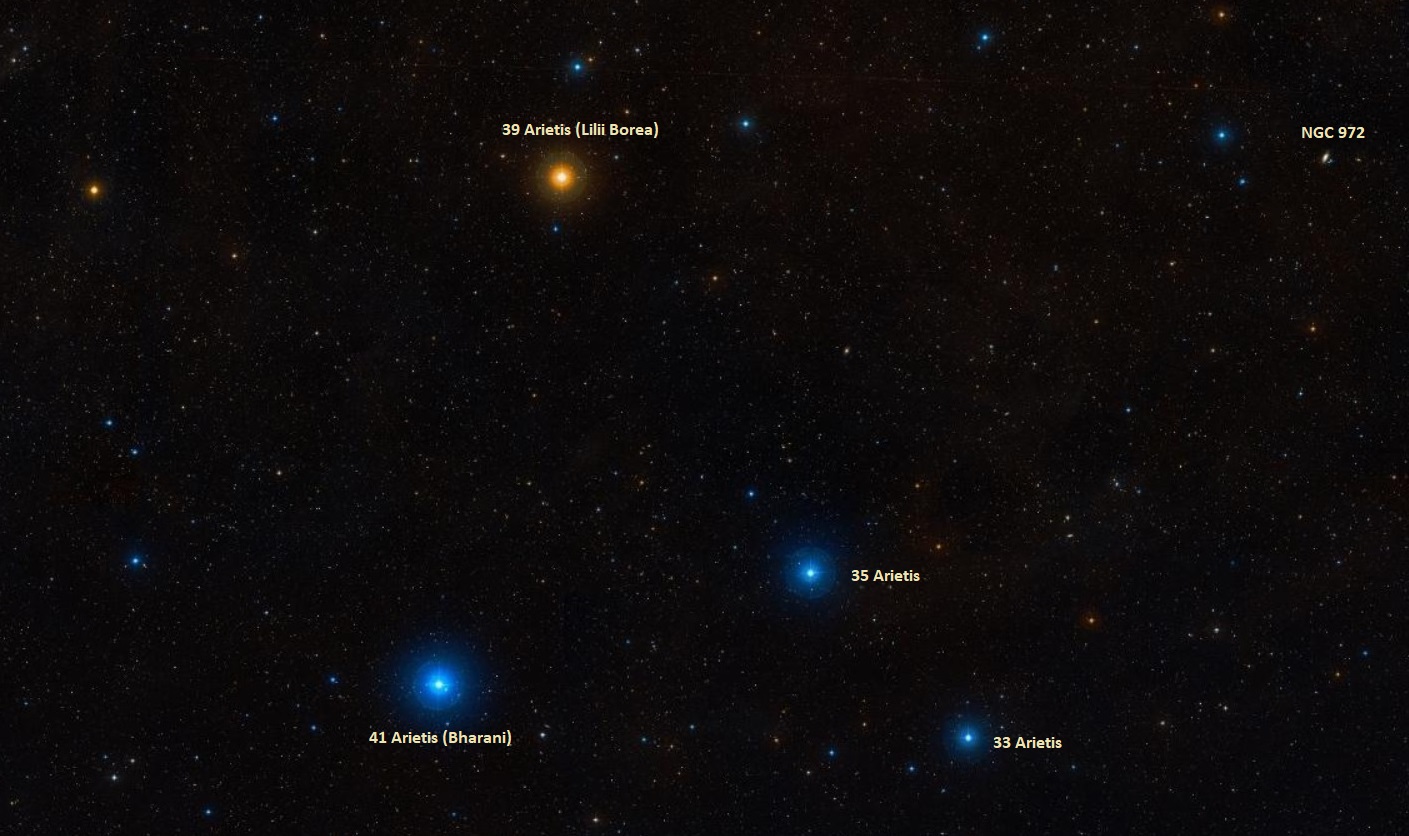 The Greco-Roman astronomer Ptolemy (2nd century CE) saw these four as unformed stars lying “over the rump” of Aries. In 1612, the Dutch-Flemish astronomer Petrus Plancius created a constellation called Apes (the name is Latin for “bees”) which consisted of these four stars. In 1624, the German astronomer Jakob Bartsch renamed the constellation into Vespa (Latin for “wasp”) because there was already a constellation with a similar name, Apis (“bee”), in the far southern sky. Apis eventually became known as Musca, the Fly.

In 1679, French architect Augustin Royer published a star map and added two new constellations to the existing 48 Greek constellations and those created by Petrus Plancius. He created the new constellations to honour his patron, Louis XIV, and called them Lilium (the Lily), after the fleur-de-lys, the emblem of France, and Sceptrum et Manus Iustitiae (the Sceptre and the Hand of Justice), representing the regal symbols. Lilium consisted of the four Aries stars. The two constellations were not widely adopted, but the name Lilium is remembered in the name Lilii Borea (“in the north of Lilium”), the official name of 39 Arietis, taken from French astronomer Nicolas-Louis de Lacaille’s description of the star in 1757. The star he described as Lilii Austrina (“in the south of Lilium”) was 41 Arietis.

The name Bharani (pronunciation: /ˈbærəni/) comes from Hindu astronomy. It is the name of the second lunar mansion, or nakshatra, formed by 35 Arietis, 39 Arietis and 41 Arietis. The word bharani itself means “the bearer.”

The name was approved by the International Astronomical Union’s (IAU) Working Group on Star Names (WGSN) on June 30, 2017. It formally applies only to the component 41 Arietis Aa.

The Chinese know Bharani as 胃宿三 (Wèi Su sān), the Third Star of Stomach. The Chinese Stomach asterism is one of the seven mansions of the White Tiger. It represents the tiger’s body and consists of the same three stars as the Indian nakshatra, 35 Arietis, 39 Arietis, and 41 Arietis.

In Zoroastrianism, Bharani was associated with Upa-paoiri, one of the yazatas (holy beings).

Bharani can be challenging to find from light polluted areas, but in good conditions it can be identified as one of the three stars forming a small triangle in the area between the bright Pleiades cluster (Messier 45) and Triangulum constellation. The star is located roughly halfway between the Pleiades and Mothallah, the second brightest star in Triangulum and one of the three stars that form the triangle that gives the constellation its name. 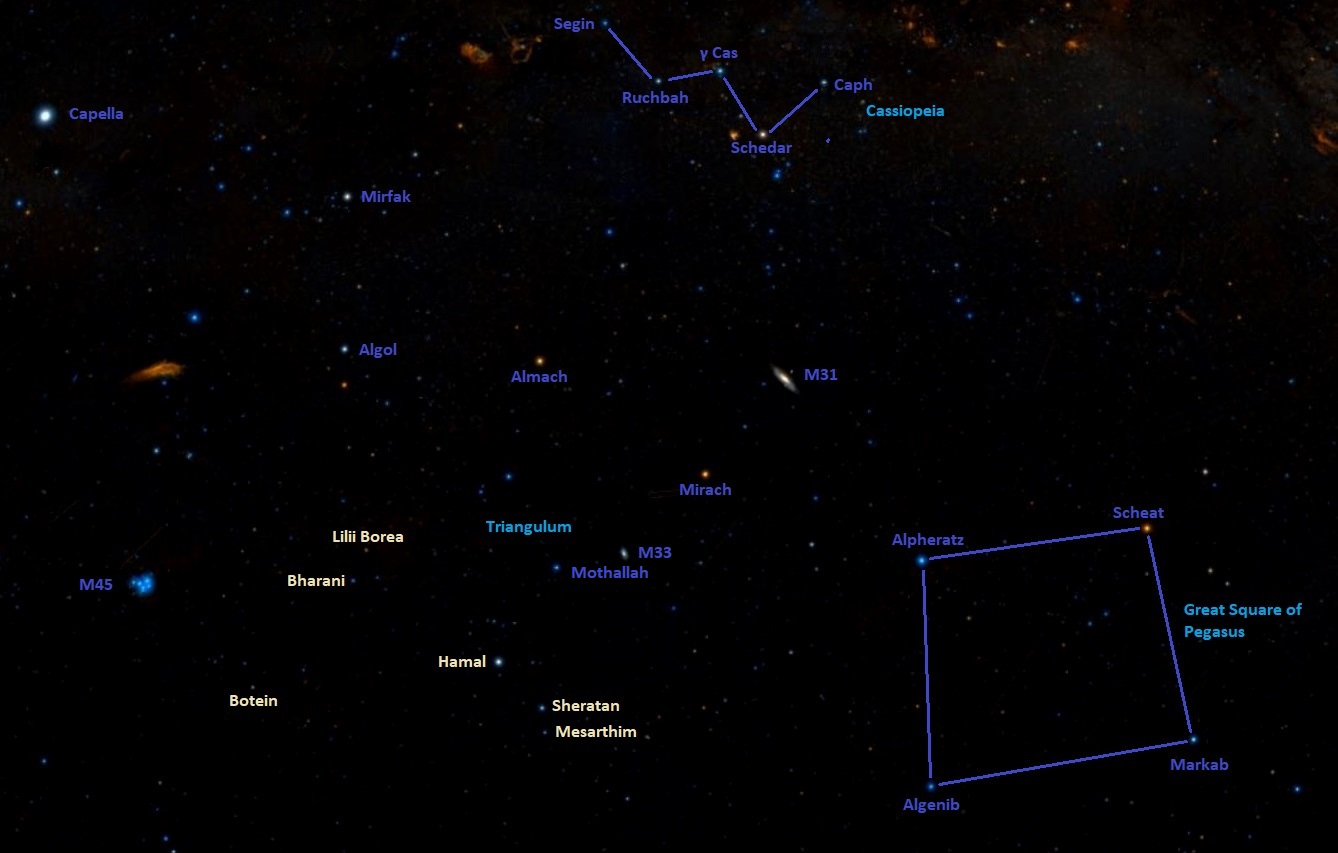 Bharani is located in the constellation Aries. Known since ancient times, the Ram was first catalogued by Ptolemy of Alexandria in the 2nd century CE. In antiquity, the constellation contained the northern vernal equinox, which has since moved to the neighbouring Pisces. Aries is not particularly bright but it can be identified by the pattern formed by its three bright stars, Hamal, Sheratan and Mesarthim. Two of these can be used for finding the constellation’s best-known deep sky objects. Mesarthim can be used as a guide to the bright unbarred spiral galaxy NGC 772 and its fainter elliptical neighbour NGC 770, while Sheratan can be used to find the NGC 691 Group, a relatively bright group of galaxies whose foremost member is the unbarred spiral galaxy NGC 691.

Other notable deep sky objects in Aries include the interacting galaxies NGC 935 and IC 1801, the dwarf irregular galaxy NGC 1156, and the elliptical galaxy NGC 821.