Marfik, Lambda Ophiuchi A (λ Oph A), is the primary component of the Lambda Ophiuchi triple star system. Located at an approximate distance of 173 light years from Earth, the system has a combined apparent magnitude of 3.82 and is the 12th brightest point of light in the constellation Ophiuchus. It marks the elbow of the celestial Serpent Bearer.

Lambda Ophiuchi A is a hydrogen-fusing star of the spectral type A0V. It has a mass about 2.62 times that of the Sun. With a surface temperature of 8,831 K, it shines with about 76 solar luminosities. The star is a fast spinner, with a projected rotational velocity of 138 km/s.

Both Lambda Ophiuchi B and C are less massive than the primary, with estimated masses of 1.90 and 0.72 solar masses. Lambda Ophiuchi B has the stellar classification A4V. It forms a binary pair with Lambda Ophiuchi A. The stars orbit around a common centre of mass with a period of 192 years. They are separated by 0.91’’ on the sky. Lambda Ophiuchi C is separated by 119’’ from the main pair. It has a radius of only 0.58 solar radii and shines with only 7% of the Sun’s luminosity. The star takes hundreds of thousands of years to complete an orbit around Lambda Ophiuchi A and B.

The name Marfik comes from the Arabic marfiq, meaning “elbow.” It refers to the star’s position in the constellation Ophiuchus. The name was approved by the International Astronomical Union’s (IAU) Working Group on Star Names (WGSN) on September 12, 2016. It formally applies only to the brightest component, Lambda Ophiuchi A.

The name Marfik shares the same etymology with Mirfak, Alpha Persei, and Marsic, Kappa Herculis, the stars that mark the elbows of Perseus and Hercules. Similarly, the stars at the elbow of Cassiopeia – Theta and Mu Cassiopeiae – have both traditionally been known as Marfak, but the name has not been officially approved for either star.

The Chinese know Marfik as the Second Star of Jewel Market (列肆,Liè Sì). Jewel Market is a Chinese asterism formed by Marfik with Sigma Serpentis. It is part of the Heavenly Market Enclosure mansion, which represents the emperor’s realm.

Marfik is easy to find, but with a visual magnitude of 3.82, it does not really stand out in this part of the sky. Marking the elbow of Ophiuchus, the star is located just north of Yed Prior (Delta Ophiuchi) and Yed Posterior (Epsilon Ophiuchi), the stars that mark the Serpent Bearer’s left hand.

Yed Prior and Yed Posterior are the westernmost in a line of bright Ophiuchus stars located just north of Antares and the claws of Scorpius. The line begins with Sabik, the second brightest star in Ophiuchus and extends though Zeta Ophiuchi, the constellation’s third brightest star, to the stars marking the hand of Ophiuchus. Marfik can be found west of the imaginary line extended from Antares through Zeta Ophiuchi. 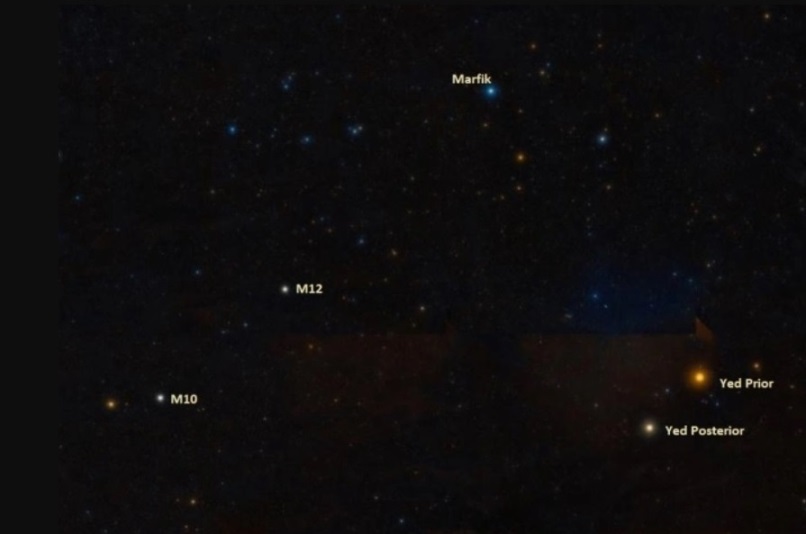 Ophiuchus is the 11th largest constellation in the sky, stretching across an area of 948 square degrees. With five stars brighter than magnitude 3.00, the constellation is not inconspicuous, but it does not really stand out either. Its brightest star, the white subgiant Rasalhague, shines at magnitude 2.07.

Ophiuchus contains a number of bright deep sky objects. In addition to the clusters Messier 10 and Messier 12, the constellation is home to the globular clusters Messier 9, Messier 14, Messier 19, Messier 62, and Messier 107. Other deep sky objects in Ophiuchus include the open cluster IC 4665, the ultraluminous infrared galaxy NGC 6240, the dark nebula known as the Dark Horse Nebula, and the bipolar planetary nebula M2-9, also known as Minkowski’s Butterfly or the Twin Jet Nebula.

The best-known stars in the constellation are Barnard’s Star, the fourth nearest individual star to the Sun (after Proxima Centauri, Rigil Kentaurus and Toliman in the Alpha Centauri system) and the recurrent nova system RS Ophiuchi, composed of a red giant and a white dwarf. Ophiuchus is also home to Kepler’s Supernova (SN 1604), the remnant of a Type Ia supernova seen in 1604.

The best time of year to observe the stars and deep sky objects in Ophiuchus is during the month of July, when the constellation rises high in the evening sky. Ophiuchus can be seen in its entirety from locations between the latitudes 80° N and 80° S, i.e. from most inhabited places on Earth.