Unukalhai, Alpha Serpentis (α Ser), is an orange giant star located in the constellation Serpens. With an apparent magnitude of 2.623, it is the constellation’s brightest star. It lies at a distance of 74 light years from Earth.

Alpha Serpentis is an orange giant star of the spectral class K2 III. As it evolved away from the main sequence, it has expanded to a size of 12 solar radii. With a surface temperature of 4,498 K, it is 70 times more luminous than the Sun. Visually, it shines with only 38 solar luminosities and the rest of its energy output is in the invisible infrared. Unukalhai is a very slow spinner, with a projected rotational velocity of 4.3 km/s.

The star’s angular diameter was measured interferometrically in 2004, yielding a value of 4.85 ± 0.05 milliarcseconds for the limb-darkened diameter.

Unukalhai has two companions: a magnitude 11.8 star separated by 58.2 arcseconds and a 13th magnitude star 2.3 arcminutes away.

With an apparent magnitude of 2.63, Unukalhai just barely does not make the list of 100 brightest stars. It is only slightly fainter than Gienah in the constellation Corvus, Ascella in Sagittarius and Zubeneschamali in Libra and it just outshines Sheratan in Aries, Zubenelgenubi in Libra and Phact in Columba.

In Arabic astronomy, Unukalhai is part of an asterism known as al-Nasaq al-Yamānī, meaning “the Southern Line.” Other stars that form the asterism are Delta Serpentis, Epsilon Serpentis, Yed Prior (Delta Ophiuchi), Yed Posterior (Epsilon Ophiuchi), Zeta Ophiuchi, and Gamma Ophiuchi. The Southern Line is part of the larger asterism called al-Nasaqān, meaning “the Two Lines.” The names Nasak Yamani I and Nasak Yamani II are listed for Delta and Epsilon Serpentis in a 1971 NASA catalogue.

The name Unukalhai (pronunciation: /ˌjuːnək.ælˈheɪ/) comes from the Arabic ʽunuq al-ḥayyah, meaning “the neck of the serpent.” It is the star’s traditional name and has also been spelled Unuk al Hay and Unuk Elhaija.

Alpha Serpentis is also known as Cor Serpentis, which is Latin for “the heart of the serpent.”

Unukalhai lies in Serpens Caput, the western part of the constellation Serpens, that outlines the head of the celestial serpent. The star is relatively easy to find on a clear night because it forms an almost equilateral triangle with Arcturus, the brightest northern star, and the magnitude 2.23 Alphecca, the brightest star in the semicircle of stars that outline the recognizable shape of Corona Borealis, the Northern Crown. 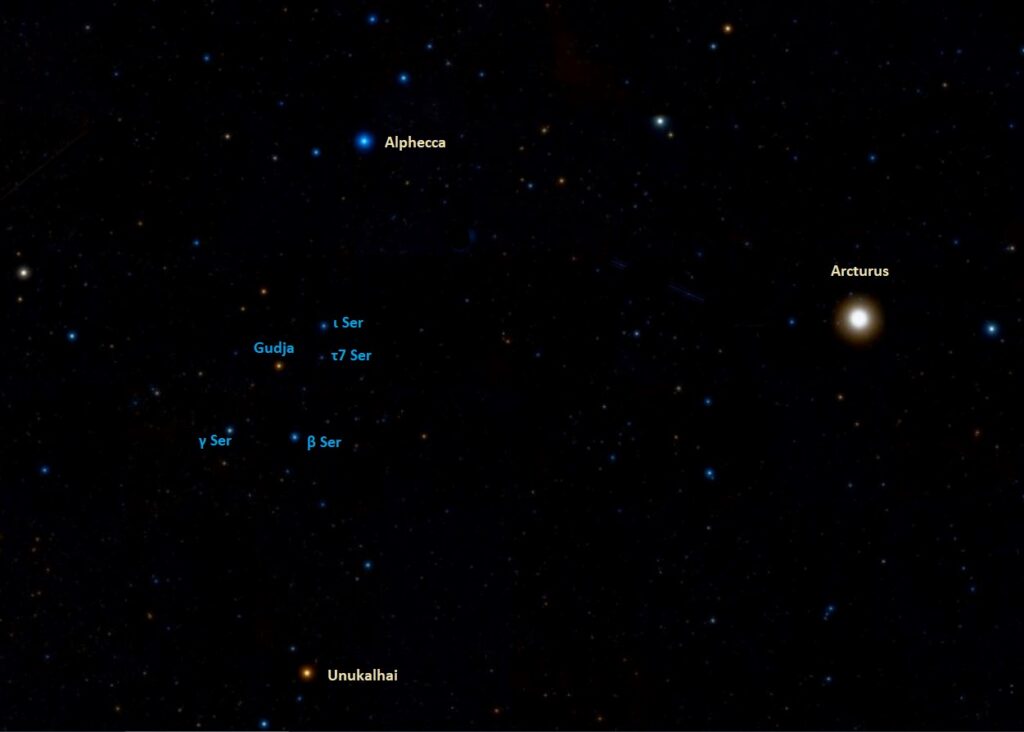 Arcturus is easy to identify because it lies on an imaginary curved line extended from the three stars that form the handle of the Big Dipper: Alioth, Mizar and Alkaid. 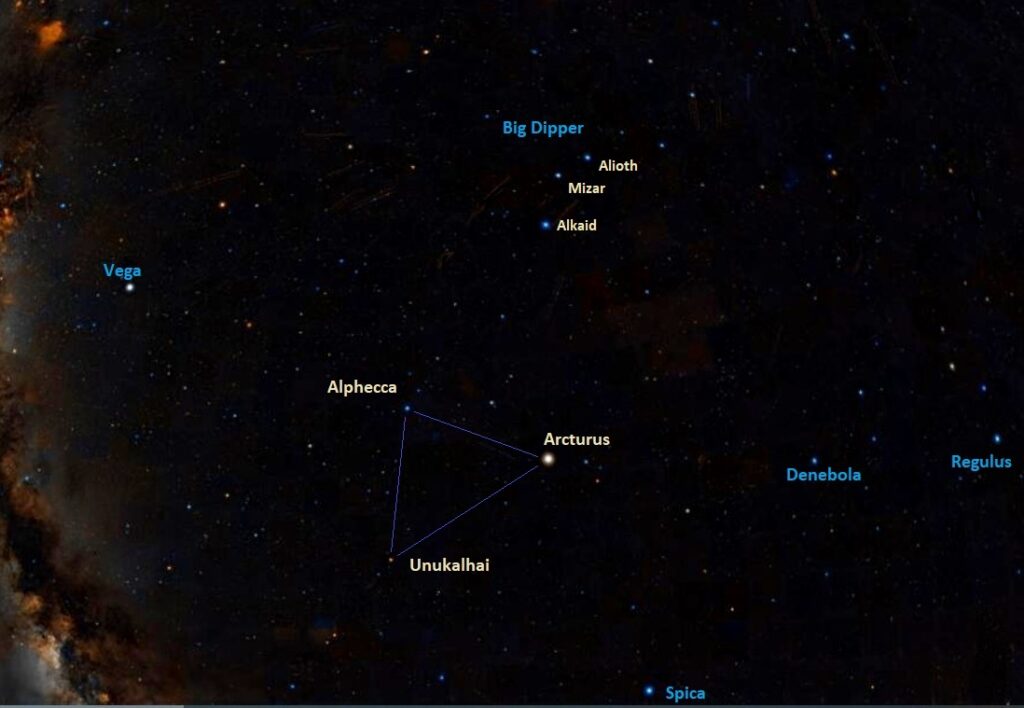 Unukalhai can be used to find the magnitude 11.9 barred spiral galaxy NGC 5964, which lies in the same field of view as the star. The galaxy occupies an area of 4’.2 by 3’.2 of the sky and lies approximately 66.5 million light years away. 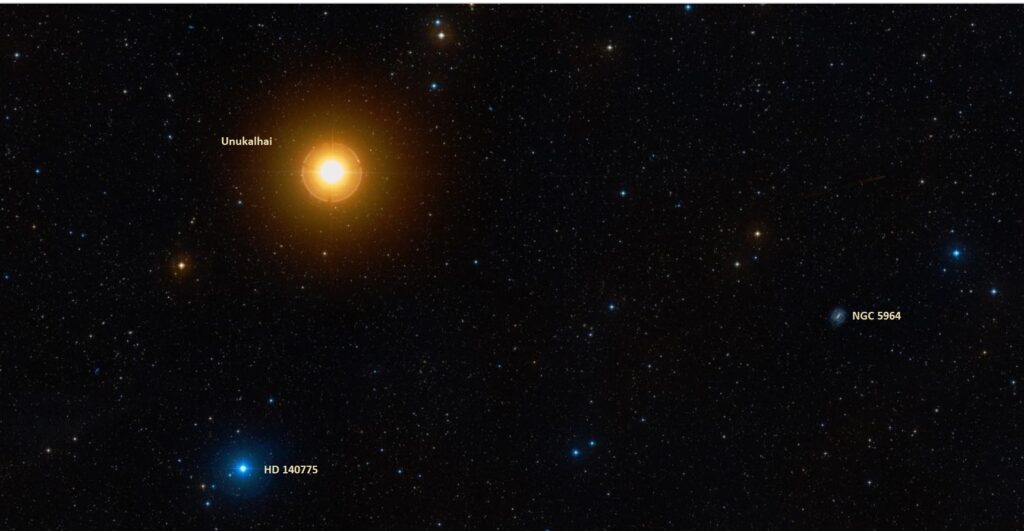 Unukalhai is located in the constellation Serpens. It marks the neck of the snake held by Ophiuchus, the Serpent-Bearer. Serpens is one of the 48 Greek constellations, first listed by the Greek astronomer Ptolemy in the 2nd century CE. It is one of the larger constellations, 23rd in size out of 88, occupying an area of 637 square degrees. It is, however, not particularly prominent because Unukalhai is its only star brighter than magnitude 3.00. Serpens is the only one of the 88 modern constellations that is split into two parts – Serpens Caput (Serpent’s Head) and Serpens Cauda (Serpent’s Tail) – by another constellation (Ophiuchus). It is visible in its entirety from locations between the latitudes 80° N and 80° S, which is to say, it can be seen from most inhabited areas on Earth.

Serpens lies in a region of the sky through which part of the Milky Way plane passes and is therefore rich in our galaxy’s deep sky objects. The best known of these are the star-forming Eagle Nebula (Messier 16), home to the famous dust clouds known as the Pillars of Creation, the emission nebula IC 4703 surrounding M16, the magnitude 6.65 globular cluster Messier 5, located in the Milky Way’s halo, the Red Square Nebula, a bipolar nebula surrounding the star MWC 922, the HII region Westerhout 40, and the Serpens South star cluster.

The best time of year to see the stars and deep sky objects in Serpens is during the month of July, when the constellation rises high in the evening sky.