Thuban, Alpha Draconis (α Dra), is a spectroscopic binary star system located in the constellation Draco. Even though it has the designation Alpha, it is only the eighth brightest star in Draco. It has an apparent magnitude of 3.6452 and lies at an approximate distance of 303 light years from Earth. From 3942 BCE to 1793 BCE, Thuban was the north pole star, the nearest visible star to the north celestial pole.

Alpha Draconis is a single-lined spectroscopic binary star system, which means that only the spectral lines of the primary component are visible. The binary pair orbit each other with a period of 51.5 days and an eccentricity of 0.43. The stars are separated by about 0.46 astronomical units.

The primary component, formally named Thuban and designated Alpha Draconis A, has the stellar classification A0III, indicating a white giant star. The star has been used as a spectral standard for its class. It has a mass 2.8 times that of the Sun and is 479 times more luminous. It has stopped fusing hydrogen in its core and has expanded to a size of 3.4 solar radii. It has an effective temperature of 10,100 K.

The companion, Alpha Draconis B, has 2.6 solar masses and shines with 40 solar luminosities. It is 1.83 magnitudes fainter than the primary component. It is believed to be a main sequence star slightly cooler than the giant, possibly of the spectral type A2.

In 2019, a survey with the Transiting Exoplanet Survey Satellite (TESS) revealed that the system was an eclipsing binary star. It exhibits primary and secondary eclipses with depths of 9% and 2%, indicating that the eclipses are partial, with an inclination of slightly less than 90°. They last only six hours.

Thuban is one of the stars that take their turn as the North Star during the Earth’s precession cycle. It last held the title from 3942 BCE to 1793 BCE, when some of ancient Egypt’s largest pyramids were built. It was closest to the pole in 2830 BCE.

Of all the pole stars, Thuban comes closest to the north celestial pole – within 0.2° – but it is also fainter than most other pole stars. In comparison, Polaris, the current North Star, comes within 0.5° of the north celestial pole and has an apparent magnitude of 1.98. Polaris is very useful in navigation because it is both relatively bright and located very close to the pole. The same cannot be said for the current south pole star, Sigma Octantis (Polaris Australis), which is barely visible with a magnitude of 5.47 and cannot be used in navigation. The brightest stars that serve as indicators of true north – Vega (mag. 0.026) and Deneb (mag. 1.25) – only come within 5° and 7° of the pole.

Animation of the cycle of precession of Earth’s axis, depicting the orientation of the axis in relation to the North Ecliptic Pole. Image: Wikimedia Commons/Tfr000 (CC BY-SA 3.0)

As the North Star, Thuban was preceded by Edasich (Iota Draconis, mag. 3.29) and succeeded by the brighter Kochab (Beta Ursae Minoris, mag. 2.08), one of the stars of the Little Dipper, and the fainter Kappa Draconis (mag. 3.82). Kochab and Kappa Draconis share timing as near-north stars, coming within 6° and 7° of the north celestial pole. Thuban has slowly drifted away from true north over the last 4,800 years but will gradually move back and be the North Star again in 20346 CE. 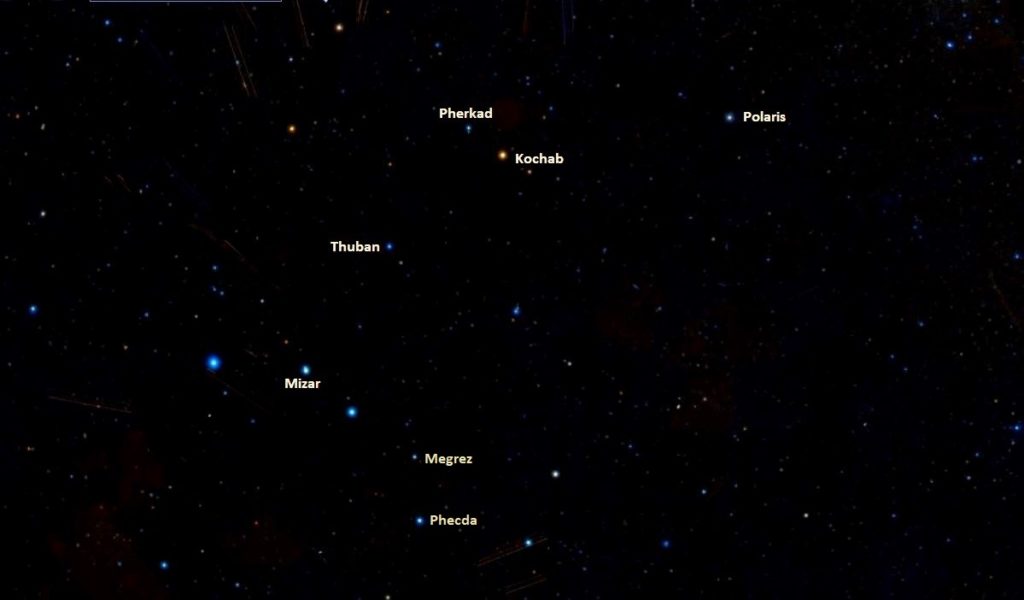 The name Thuban (pronunciation: /ˈθjuːbæn/) comes from the Arabic word thuʿbān, denoting a large snake. Thuban has also been known as Adib, derived from the Arabic Al Dhi’bah, meaning “the hyenas,” and as the Dragon’s Tail, the latter indicating its position in the constellation.

The name Thuban was approved by the International Astronomical Union’s (IAU) Working Group on Star Names (WGSN) on June 30, 2016. It formally applies only to the component Alpha Draconis A.

Thuban is easy to identify but challenging to see from light-polluted areas. The star lies about halfway between Mizar, the middle star of the Big Dipper’s handle, and Kochab and Pherkad, the stars that form the outer side of the Little Dipper’s bowl.

An imaginary line extended from Phecda through Megrez, the inner stars of the Big Dipper’s bowl, points toward the star. 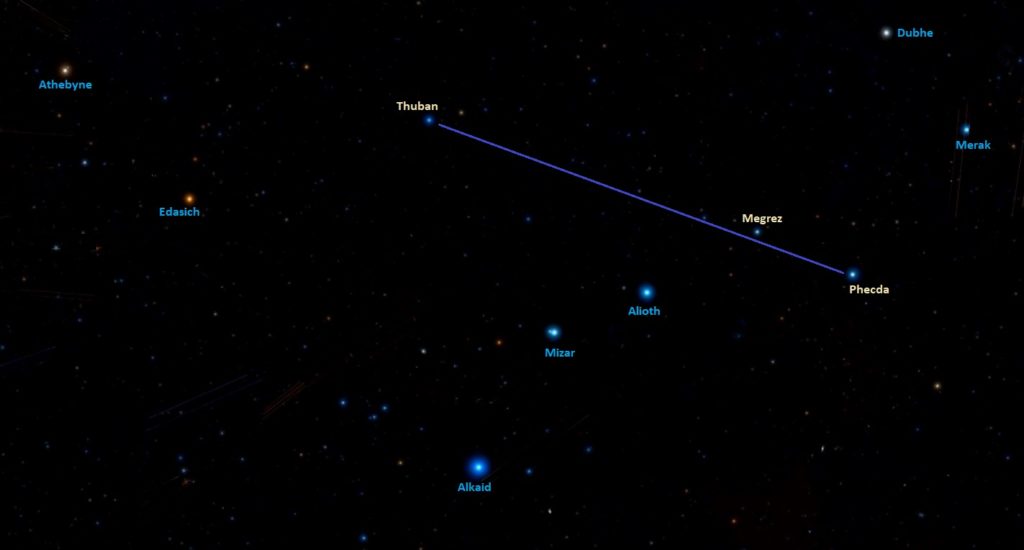 Thuban lies in the constellation Draco. Draco is the eighth largest constellation in the sky and the fourth largest northern constellation, occupying an area of 1,083 square degrees. However, it is not particularly conspicuous, as its brightest star, Eltanin (Gamma Draconis), has an apparent magnitude of 2.24.

Draco lies in the far northern sky, winding around the north celestial pole, and is circumpolar, i.e. it never sets and is visible throughout the year, for observers in northern latitudes. The constellation contains several interesting deep sky objects. These include the lenticular galaxy NGC 5866, nicknamed the Spindle Galaxy and believed to be the object Charles Messier catalogued as M102, the disrupted spiral galaxy known as the Tadpole Galaxy (Arp 188), the Cat’s Eye Nebula (NGC 6543), a bright planetary nebula with a visual magnitude of 9.8, the massive galaxy cluster Abell 2218, and the Draco Dwarf Galaxy, one of the faintest satellites of the Milky Way.

The best time of year to observe the stars and deep sky objects in Draco is during the month of July.