Mu Cephei (μ Cep) is a red supergiant located in the constellation Cepheus. With an average apparent magnitude of 4.08, it is the 10th brightest star in the constellation. Also known as Herschel’s Garnet Star and notable for its striking red colour, Mu Cephei is a spectral standard for its class (M2). It is one of the largest known stars, with a radius 1,260 – 1,650 times that of the Sun, and one of the largest stars visible to the unaided eye. Located at an approximate distance of 2,840 light years from Earth, it is one of the most distant stars visible without binoculars.

Mu Cephei is a red supergiant of the spectral type M2e Ia. It is often described as a hypergiant, a highly luminous star (luminosity class 0 or Ia+) that is rapidly losing mass due to strong stellar winds. Other red hypergiants include NML Cygni, VX Sagittarii, VY Canis Majoris, S Persei, and currently the two largest stars known: WOH G64 and Westerlund 1-26.

Mu Cephei has a mass loss rate of a few times 10-7 solar masses per year. The mass loss has left it enshrouded in an envelope of dust that stretches up to 15,000 astronomical units from the star. The dust shell has an expansion velocity of 10 km/s-1, indicating that it formed about 2,000 to 3,000 years ago. Mu Cephei is also surrounded by a large sphere of water vapor, also known as the MOLsphere. Mu Cephei has 19.2 solar masses, which puts it well above the limit for a supernova candidate. It is believed to have started its life with around 25 solar masses. In spite of being only about 10 million years old, it has begun to fuse helium into carbon and is approaching the end of its life. It will eventually go out as a supernova, leaving behind a neutron star or a black hole, in the not-so-distant future.

Mu Cephei is classified as a semiregular variable star of type SRc (supergiant star of a late spectral class exhibiting semiregular variations in brightness due to pulsations). It once served as the prototype for a class of stars known as the Mu Cephei variables. The class is now obsolete. Other stars of this type (SRc) include Betelgeuse (Alpha Orionis), Rasalgethi (Alpha Herculis), VX Sagittarii, S Persei, CE Tauri, and T Ceti.

The radial pulsations of Mu Cephei have a small amplitude – about 1.67 magnitudes – but the amplitude will probably increase down the line. Even though the pulsations are small, they have pushed out the star’s outer layers to form a shell of dust and gas around it.

The brightness of Mu Cephei changes between magnitude 3.4 and 5.1 with periods of 860 ± 50 days or 4,400 ± 1,060 days. At its brightest, the star is relatively easy to spot, but when it dims to magnitude 5.1, it requires very good conditions, with clear, dark skies and no light pollution.

Mu Cephei is a runaway star, travelling through space at an unusually high velocity relative to the interstellar medium. It moves with a peculiar velocity of 80.7 ± 17.7 km/s.

Many of the star’s parameters are uncertain, including size, distance and luminosity. In spite of its distance, the star is large enough to have its angular diameter measured at 0.021 arcseconds. The angular size and the distance assumed from Mu Cephei’s membership in the Cepheus OB2 association, which is about 2,400 light years, yield a physical radius of 1,650 solar radii. The distance and temperature yield a luminosity 353,000 times solar and a size of 1,450 solar radii. The radius derived from the angular diameter and a distance of 2,800 light years give a luminosity 475,000 times that of the Sun. The effective temperature of 3,750 K implies a size of 1,260 solar radii.

The estimated radius of Mu Cephei is between 1,260 and 1,650 times that of the Sun. If it replaced the Sun in our solar system, assuming a radius of 1,650 solar radii (7.7 astronomical units), it would extend between the orbits of Jupiter and Saturn. 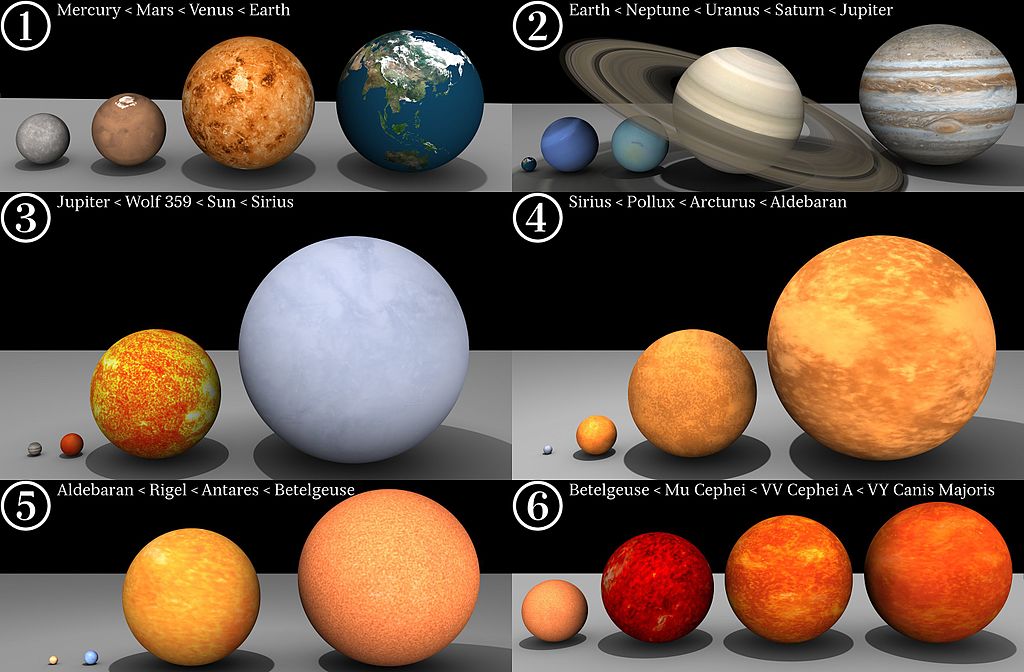 Mu Cephei appears at the edge of a large star-forming nebula catalogued as IC 1396. Located at a distance of 2,400 light years, the nebula is illuminated by HD 206267, a triple star system consisting of an O-type spectroscopic binary star and a companion. The nebula is best known for the portion designated as IC 1396 A, nicknamed Elephant’s Trunk Nebula for its peculiar shape. 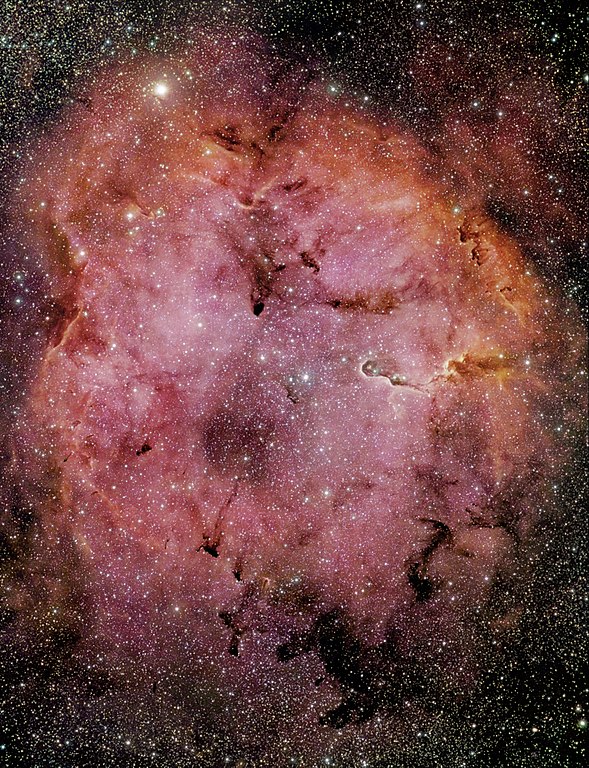 The variability of Mu Cephei was discovered by the English astronomer John Russell Hind in 1848 and confirmed by the German astronomer Friedrich Wilhelm Argelander.

The angular diameter of Mu Cephei was measured directly using the Mark III Stellar Interferometer at Mount Wilson Observatory in California in the period between 1988 and 1990. The observations yielded a uniform-disk diameter of 18.672 ± 0.435 milliarcseconds at 800 μm and a limb-darkened diameter of 20.584 ± 0.480 milliarcseconds.

Mu Cephei does not have a formal name, but it is known as Herschel’s Garnet Star and has also been called Erakis. Neither of the two names has been officially approved by the International Astronomical Union (IAU).

Mu Cephei was nicknamed Herschel’s Garnet Star after the German-born British astronomer William Herschel (1738-1822) had compared the star’s colour to that of Mira (Omicron Ceti), describing it as “a very fine deep garnet colour, such as the periodical star ο Ceti was formerly, and a most beautiful object, especially if we look for some time at a white star before we turn our telescope to it, such as α cephei, which is near at hand.” The description can be found in the Philosophical transactions of the Royal Astronomical Society of London (1783). Italian astronomer Giuseppe Piazzi (1746-1826) subsequently called Mu Cephei Garnet sidus (Garnet Star) in his Palermo Catalogue of stars (1803).

The name Erakis was used in the Czech astronomer Antonín Bečvář’s star catalogue, but the origin of the name is uncertain. It is likely that the star was mistaken for Alrakis (Mu Draconis). The name itself is derived from the Arabic al-rāqiṣ, meaning “the trotting (camel).”

Mu Cephei is located in the northern constellation Cepheus, in the region of the sky between Cassiopeia’s W and the Northern Cross of Cygnus. The brightest stars of Cepheus form a pattern that resembles a child’s drawing of a house and Mu Cephei lies at the bottom, where the entrance would be. The nearest bright star to Mu Cephei is Alderamin, the constellation’s brightest star, which can be found using the stars that form Cassiopeia’s W. A line extended from Schedar through Caph, the stars on the right side of the W, points toward the star. Going from Alderamin, Mu Cephei is the red star appearing in the direction of Lacerta constellation (the Lizard), recognizable for its zig-zag shape. 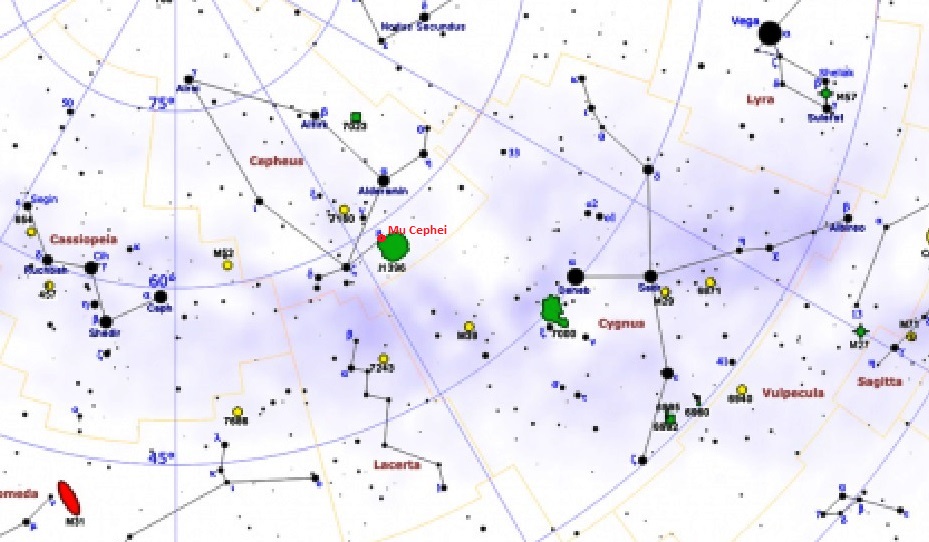 The star sits at the edge of a large region of nebulosity designated as IC 1396 and sometimes called the Garnet Star Nebula. Cepheus is best known for its variable stars, among them Delta Cephei, Alfirk (Beta Cephei), Mu Cephei and VV Cephei, the last two of which are among the largest stars known. The constellation also contains several stars that take their turn as the North Star, the nearest visible star to the north celestial pole, during the Earth’s precession cycle. These are Alderamin (Alpha Cephei), Alfirk (Beta Cephei), Errai (Gamma Cephei), and Iota Cephei.

Interesting deep sky objects in the constellation include the Fireworks Galaxy (NGC 6946), a spiral galaxy notable for hosting ten supernovae in the last century, the open cluster NGC 188, one of the oldest open clusters known, the Cave Nebula (Sharpless 155), a diffuse star-forming nebula, and the Iris Nebula (NGC 7023), a bright reflection nebula located near Alfirk and T Cephei.

The best time of year to observe the stars and deep sky objects in Cepheus is during the month of November.