Epsilon Corvi (ε Crv), traditionally known as Minkar, is a class K giant star located in the constellation Corvus. It lies at a distance of 318 light years from Earth. With an apparent magnitude of 3.024, Minkar is the fourth brightest star in Corvus, after Gienah, Kraz and Algorab. Together with these three stars, it forms Spica’s Spanker, an asterism that points the way to the bright Spica in the constellation Virgo.

Minkar has the stellar classification K2 III, indicating an orange giant. The star has a mass 3.2 times that of the Sun and a radius 52 times solar. It is a slow spinner, with a projected rotational velocity of 1.0 km/s.

Minkar started its life as a class B5V main sequence star. As it evolved away from the main sequence, its surface cooled to a temperature of 4,320 K. The star is not massive enough to go out as a supernova. Instead, when it reaches the end of its life cycle, it will cast away its outer layers and gradually fade away as a faint white dwarf.

Minkar, Gienah (Gamma Corvi), Algorab (Delta Corvi) and Kraz (Beta Corvi) form an asterism known as Spica’s Spanker. Representing a type of sail, the star pattern can be used to identify Spica, the brightest star in the neighbouring constellation Virgo and the 16th brightest star in the sky. A line extended from Gienah, the top right star of the asterism, through Algorab, the top left star, points to Spica. 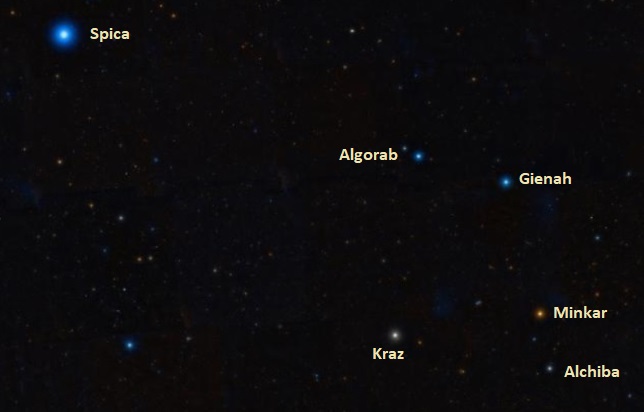 The name Minkar (pronunciation: /ˈmɪŋkɑːr/) is derived from the Arabic minqar, meaning “beak.” It comes from the phrase Al Minkar al Ghurab, meaning “the beak of the crow.” It is the traditional name of Epsilon Corvi, but it has not been formally approved by the International Astronomical Union (IAU) and is not on the list of official star names.

The Chinese know Epsilon Corvi as 軫宿二 (Zhěn Sù èr), the Second Star of Chariot. The Chinese Chariot asterism is one of the southern mansions of the Vermilion Bird. It is formed by Minkar, Gienah, Kraz and Algorab, the same stars that form Spica’s Spanker. Minkar and the brighter Gienah can be used to find the famous Antennae Galaxies (NGC 4038 and NGC 4039), the brightest members of the NGC 4038 Group. NGC 4038 and NGC 4039 have apparent magnitudes of 11.2 and 11.1. They are a pair of colliding galaxies that show a likely future of the Milky Way and Andromeda galaxies when they begin to merge. The Antennae appear west of the imaginary line connecting Gienah and Minkar. Several other members of the NGC 4038 Group appear in the same area. The barred spiral galaxy NGC 4027 has a visual magnitude of 11.7 and lies 83 million light years away. It is classified as a peculiar galaxy because its spiral arm stretches out, likely as a result of a collision with another galaxy in the past.

Other galaxies in the vicinity include the lenticular galaxy NGC 3957, the spiral galaxy NGC 3981, and the barred spiral NGC 3956.

The lenticular galaxy NGC 3955 lies a bit more to the south. It is also a member of the NGC 4038 Group. It has an apparent magnitude of 12.0 and lies about 67.2 million light years away. Epsilon Corvi is located in the constellation Corvus. Representing the crow or raven, Corvus is a small, relatively faint constellation located in the southern sky, between the larger Virgo, Hydra and Crater. With only three stars brighter than magnitude 3.00, it is not particularly conspicuous in this area of the sky. Even though it is not bright, Corvus is easily recognized because its four brightest stars form Spica’s Spanker, a quadrilateral asterism that can be used to find Spica. Notable stars in Corvus include the blue giant Gienah, the constellation’s brightest star, the bright giant Kraz, the white subgiant Algorab (which may be a pre-main sequence star instead), and the eclipsing binary systems VV Corvi and SX Corvi.

The best-known deep sky objects in Corvus are the Antennae Galaxies and the bright planetary nebula NGC 4361. The nebula has an apparent magnitude of 10.9 and lies within Spica’s Spanker.

The best time of year to observe the stars and deep sky objects in Corvus is during the month of May, when the constellation reaches its highest point in the evening. The entire constellation is visible from locations between the latitudes 60° N and 90° S.