With an effective temperature of 3,690 K, Anser shines with 415.9 solar luminosities. It is a slow spinner, with a projected rotational velocity of only 4.6 km/s. The star’s estimated age is 11.30 billion years.

Anser is a suspected variable star. Its brightness is believed to vary by about a tenth of a magnitude. However, the star’s variability has not been confirmed.

Anser is a member of the Arcturus moving group, a group of 53 stars that share a common motion through space and appear to be physically related. The group was discovered by the American astronomer O. J. Eggen in 1971 and named after its brightest member, the giant Arcturus, the brightest star in Boötes and the fourth brightest star in the sky. The member stars have high proper motion and are metal poor.

Anser forms a visual double star with 8 Vulpeculae, an orange giant star located 457 light years away. The two stars are separated by 7 arcminutes. 8 Vulpeculae is considerably fainter, shining at magnitude 5.82. It cannot be seen from light-polluted areas.

The name was approved by the International Astronomical Union’s (IAU) Working Group on Star Names (WGSN) on June 30, 2017.

Anser is not too difficult to find, but with an apparent magnitude of 4.44, it requires clear, dark skies with little to no light pollution to be seen. The star lies near the equator and can be seen from both hemispheres for at least a part of the year.

Anser lies about halfway between the bright Vega and Altair, within the Summer Triangle, which the two stars form with Deneb. Anser appears near the head of the celestial Swan (Cygnus), marked by the contrasting double star Albireo. It can be found using the Northern Cross, formed by Deneb, Sadr, Albireo, Aljanah and Fawaris in Cygnus. It lies between Albireo and the constellation Sagitta, recognizable for its arrow-like pattern, formed by Gamma Sagittae, Delta Sagittae, Alpha Sagittae (Sham) and Beta Sagittae.

Anser can be used to find several deep sky objects. The dark nebulae LDN 778 and LDN 772 lie just south of the star. Nicknamed the Loch Ness Monster nebula, the larger LDN 772 comprises several objects, including the reflection nebulae Vdb 126 and LBN 133, which mark the monster’s eyes. 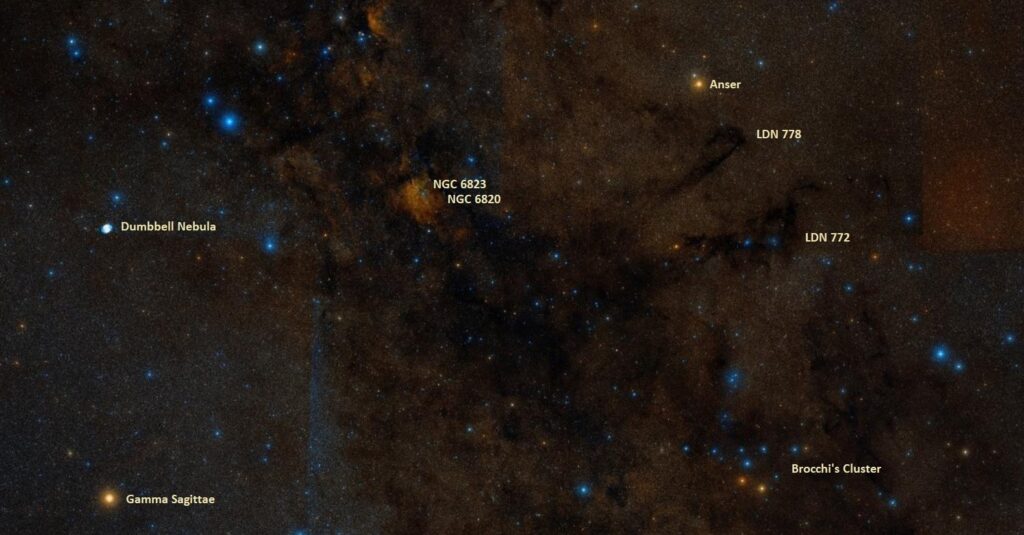 Going further south, Brocchi’s Cluster (or Al Sufi’s Cluster) is not really a cluster, but a random grouping of stars that appear in the same line of sight. Nicknamed the Coathanger, the asterism lies close to the border with Sagitta.

Anser is located in the constellation Vulpecula. Vulpecula is one of the faintest constellations in the sky, with no stars brighter than fourth magnitude. It is the 55th constellation in size, occupying an area of 268 square degrees of the northern sky. Located within the Summer Triangle – a large northern summer asterism formed by Deneb, Vega and Altair – it is only visible from locations with little or no light pollution. It lies between Cygnus and the smaller but distinctive Delphinus and Sagitta. Vulpecula contains several notable deep sky objects. These include the Dumbbell Nebula (Messier 27), the first planetary nebula ever discovered, the reflection nebula NGC 6820, the open clusters NGC 6823, NGC 6940 and NGC 6885, the elliptical galaxy NGC 7052 with a supermassive black hole, and the barred spiral galaxy NGC 7080. The constellation is also home to Brocchi’s Cluster (Collinder 399), an asterism nicknamed the Coathanger, once believed to be an open cluster.

The best time of year to observe the stars and deep sky objects in Vulpecula is during the month of September, when the constellation is high in the evening sky. The entire constellation is visible from locations between the latitudes 90° N and 55° S.