Kaus Media, Delta Sagittarii (δ Sgr) is an orange giant star located in the constellation Sagittarius. With an apparent magnitude of 2.70, it is the constellation’s fourth brightest star, after Kaus Australis, Nunki, and Ascella. Delta Sagittarii lies at a distance of 348 light years from Earth. It is one of the bright stars in Sagittarius that form the prominent southern asterism known as the Teapot. Together with Kaus Australis and Kaus Borealis, Kaus Media outlines the bow of the celestial Archer.

Kaus Media has the stellar classification K3 III, indicating a giant star appearing orange in colour. The star has a mass 3.21 times that of the Sun and has expanded to a size of 16 solar radii. It has an effective temperature of about 4,200 K. Its estimated age is 260 million years.

Delta Sagittarii is in fact a binary star system consisting of the class K giant and a white dwarf. Kaus Media, the giant star in the system, is a weak barium star whose spectrum shows an overabundance of s-process (slow neutron-capture process) elements, most likely as a result of mass transfer from the white dwarf. The Egyptian astronomer Al Achsasi al Mouakket referred to Delta Sagittarii as Thani al Waridah, or “second of Warida” in his Calendarium, written in the mid-17th century. In Arabic astronomy, Kaus Media, Kaus Australis, Eta Sagittarii and Gamma Sagittarii formed an asterism known as Warida, whose name is derived from the Arabic Al Naʽāma al Wārida, meaning “the ostrich going down to the water.” Warida was one of the two asterisms representing groups of ostriches. The other group was represented by Nunki (Sigma Sgr), Phi Sagittarii, Ascella (Zeta Sgr), Chi and Tau Sagittarii. Kaus Borealis and Polis (Mu Sagittarii) were seen as the ostriches’ keepers.

Kaus Media was used in William R. Forstchen’s 1969 novel Into the Sea of Stars. In the novel, the star is the destination of a voyage that a crew consisting entirely of women begins in 2053 and is still en route a millennium later.

The traditional name of Delta Sagittarii – Kaus Media (pronunciation:  /ˌkɔːs ˈmiːdiə/) – comes from the Arabic qaws, meaning “bow,” and the Latin media, meaning “middle.” The name refers to the star’s position in Sagittarius constellation. Kaus Media marks the centre of the Archer’s bow, while the brighter Kaus Australis marks the southern tip and the fainter Kaus Borealis, the northern tip of the bow. In older sources, Kaus Media is also referred to as Kaus Meridionalis.

In Hindu astrology, Delta Sagittarii is known as Purvashada Nakshatra.

Kaus Media is very easy to find because it is part of a prominent southern asterism. The Teapot lies near a rich field of the Milky Way and is easily recognizable on a clear night. Kaus Media is one of the stars that form the body of the Teapot. Northern observers can see the Teapot in the summer months, when it reaches its highest point in the sky and appears just above the southern horizon. 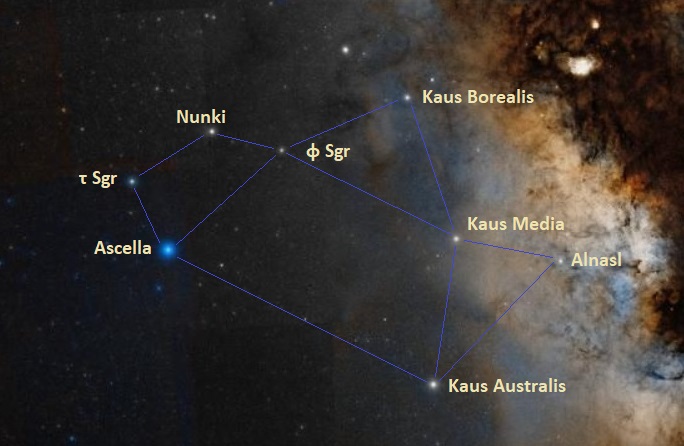 Delta Sagittarii can be used to find the globular cluster NGC 6624, which lies only 0.8 degrees southeast of the star. The cluster has an apparent magnitude of 7.6 and occupies 8.8 arcminutes of the apparent sky. It lies at a distance of 25,800 light years from Earth. The cluster appears as a hazy patch in small telescopes. Kaus Media can also be used to find several bright Messier objects. The globular cluster Messier 55 lies on an imaginary line extended from the star through Ascella (Zeta Sgr). The cluster is located about 17 degrees east of Ascella. A line extended from Kaus Australis through Kaus Media northward leads to the Sagittarius Star Cloud (Messier 24), a large Milky Way star cloud about 10,000 light years away. A line from Kaus Australis drawn to the left of Kaus Media points in the direction of two famous nebulae: the Eagle Nebula (Messier 16) in the constellation Serpens and the Omega Nebula (Messier 17) in Sagittarius.

Kaus Media is located in the constellation Sagittarius. Like other constellations in the zodiac family, Sagittarius was first listed by the Greco-Roman astronomer Ptolemy in the 2nd century CE. It is the 15th largest of the 88 constellations, occupying 867 square degrees of the southern sky.

Sagittarius is also home to the Arches Cluster and the Quintuplet Cluster, two open clusters that contain some of the most massive and most luminous stars known.

The best time of year to observe the stars and deep sky objects in the constellation is during the month of August, when Sagittarius is prominent in the evening sky.